Why Not Say Yes? 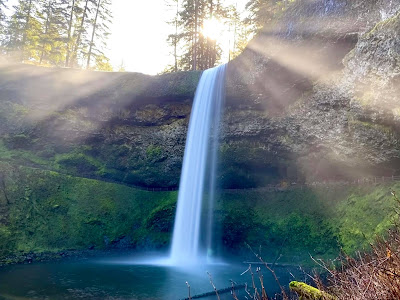 Crystal's message popped up while I was at work. Sneaking a peak, I read "okay...SUPER SHORT NOTICE...who's up for playing hooky and a road trip?" My old self immediately scoffed and had to remind me it's midweek, so I can't go. I have responsibilities. My negative Nancy kicked in, "And even if you could, this place she wants to go is like a six hour drive...with other girls you don't know well. It will be awkward...they probably won't like you...plus your back has been hurting..." 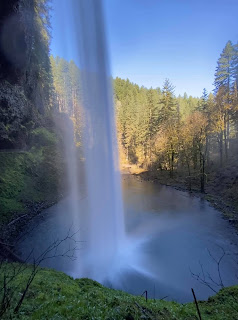 But hiking has taught me listen to the other voice. The quieter one. The one that softly whispers, "Why not say yes?" I'm so fortune to be able to take a day off here and there, but I always feel guilty. Why? Because other people have to work. But the gentle voice reassures me I don't need to feel bad. It's okay to say yes. The voice encourages me to take a chance on people not liking me. It's okay if they don't. 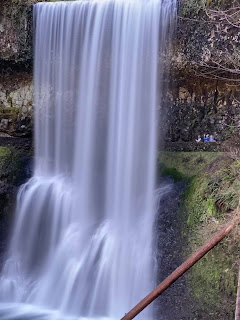 I have never regretting listening to the better voice, and this was no exception. What a treat to not do any of the planning - to just hop in a car and head somewhere I've never heard of. But I had to wonder, how could I have never heard of this magical place? 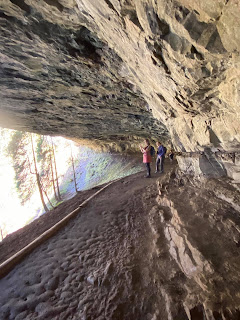 Crystal had scored a vary hard to get reservation at Oregon's Silver Falls State Park in order to be able to hike "The Trail of Ten Falls" the next day. The eight mile loop was pure perfection (just look at these pics!) but the best part of the trip was getting to know these amazing ladies a little better - and to let them get to know me. So I'll continue to ask myself - why say no, when yes is so much better?
Happy trails...with lots of happy yeses :) 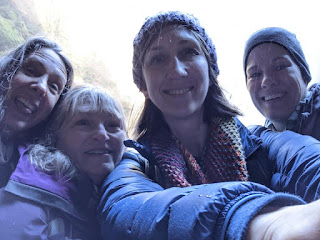 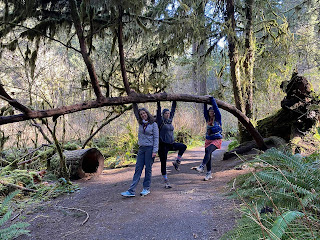 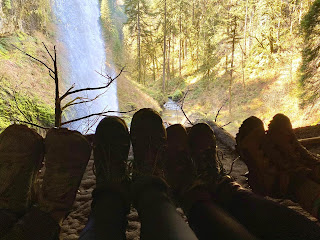 Posted by kellbell at 9:53 PM No comments: 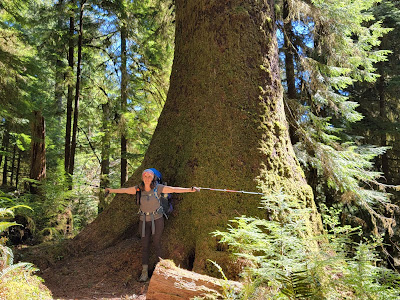 Well, that didn't work. My website attempt, that is. Yep, crashed and burned. All the hikes that I've written about since getting back from my 50 days--lost. Yep, I wrote them directly on the site with no back up whatsoever. Oops. But what can you do? Shrug, brush yourself off, and keep on keeping on. I even hope to rewrite all 23 of them - as best I can with my increasingly bad memory, anyway. Even though my dream of having a successful website that actually makes a little money is dead, I do like to keep a diary of my hikes. Reliving them is half the fun. 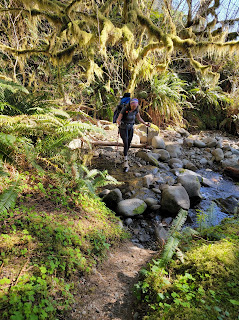 Plus I do like the idea of giving out some helpful hiking info if I can. Last weekend's backpack to the Bogachiel Rain Forest was actually my inspiration to not give up on writing. I kept thinking, "People need to know about this!" So, here I am to sell it to you! 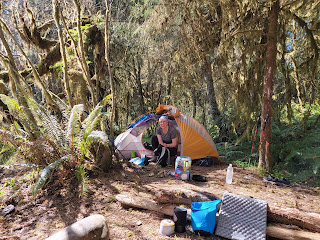 And why do I need to sell it? Because nobody hikes the Bogachiel...and I don't blame them. If you are going to drive all the way to the edge of the Olympic Peninsula, you want to go to the beach! I mean, that's what I wanted. After getting Ozette to Rialto under my belt in February (one of the hikes I'll need to rewrite) I've been itching to get the Third Beach to Oil City section crossed off my list as well. Besides the obvious appeal of the ocean, I'm also obsessed with the PNT of late - which includes all these miles. (The Pacific Northwest Trail to clarify...not to be confused with the better known Pacific Crest Trail.) But here comes your first bit of helpful information - permits on the South Coast Trail are not unlimited like they used to be. And on the beautiful, unseasonably hot weekend we just had, of course they were all gone. My guess is anywhere you could put up a tent in Washington was pretty much full up. 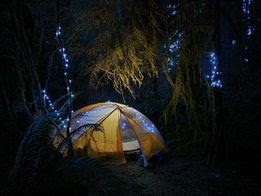 Everything except Bogachiel, that is. It's also PNT miles (which is the only reason I wanted to do it) so my new hiking buddy, Julie, reluctantly agreed to come with. Something was better than nothing...though we were both ready to be underwhelmed with a slog through a dark, mucky forest. 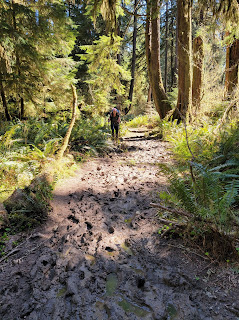 Mucky might not be a selling point (and yes, you'll be going around mud...I wouldn't try it any earlier than we did!) but let me list the many selling points of Bogachiel:

1) Solitude. Even though the road is not bad (though redirected...follow the signs and not Google Maps) the parking lot large and the toilet top notch - you will not find crowds here. We saw a handful of people total. 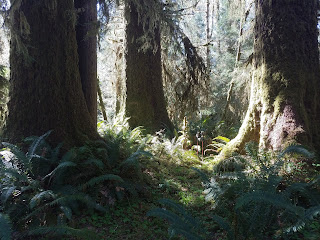 2) Great campground at turn off to forest road, if you wanted to stay there and just day hike. There are parts of the trail that are a bit sketchy (though I call a rope climb fun!) and you might find it more enjoyable without a backpack.

3) Absolutely stunning. Pictures never do justice, but they give you an idea.

4) You're still just a half hour from the beach, so you can throw that in on the way home! 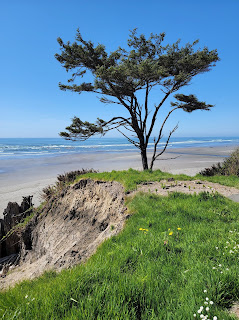 And as far as helpful info goes, hopefully these are useful:

1) After the initial decline, turning left on the Ira Spring Wetland Trail and then turning right to return on the main trail makes a nice little loop (four miles maybe?) and you can also include a secondary "Homestead Loop" to add another half mile. (We skipped it, so I can't say if it's worth it.) The main trail is the really muddy part, but you could avoid it altogether if you wanted to just go in and out via the Ira Spring Trail.

2) We read there was a good campsite "right after" the rope section (you'll get to the rope at 4 miles in...don't worry, it's not bad) so we got a bit frustrated when we couldn't find it. Just keep going, it's hard to miss, but it is another mile. 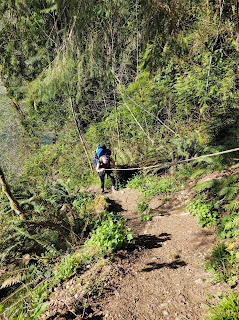 3) We got a permit to camp at the "Bogachiel" site, which is supposedly at 6 miles in. Thank God we set camp at that first unofficial spot, because after continuing on without our packs (just to explore) we couldn't find anything camp worthy to save our lives. Maybe we didn't go far enough, but we did go almost 3 more miles.(That would be around 8 miles total if tracking device was correct.)

4) There is a pretty bad blow down mess at about 6 miles in. Instead of trying to crawl under then over, look to your right where you'll see a big log you can walk on. That path around it is much easier. (Julie discovered it on the way back when she was desperate not to get any more needles down her back.) 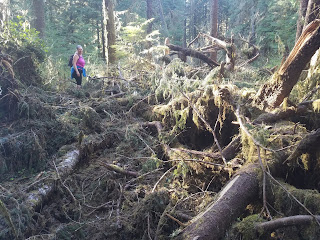 5) If you want to see the "Tree of Life" (almost the tree of death at this point) on your way home like we did, the Kalaloch Lodge has amazing burgers and a cute gift store. It's worth a stop even without the tree. 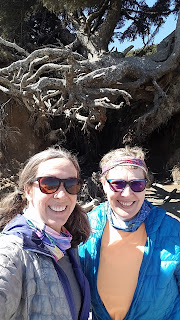 And there you have it!! It feels good to be back. Here's to another 500 more miles - here and there and everywhere! (But especially on the PNT...which is actually my next goal. I'll talk more about it next time :)) Happy trails, everyone, and cheers to starting over. 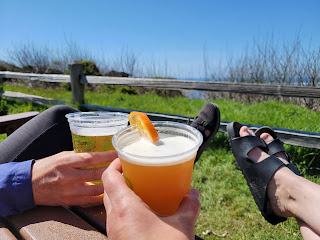