I'm Up to Three Nights! 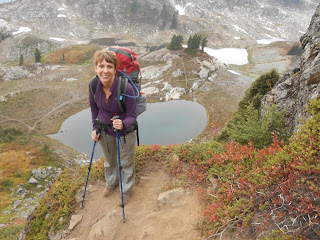 For anyone who doesn't really understand my plan for hiking the Appalachian Trail (or the AT in hiker speak), I'll start by giving a brief summary. (For the long version you can go to the "Explaining My Theme" post in September 2010)
I plan on celebrating my mid life crisis of turning 50 by heading to the east coast trail for 50 days. (6 years from now) When I came up with this idea, I had never backpacked in my life; so I thought I should start with one night, then the next year do two, and so on until the year I turned 50. That would put me at 8 nights, which I figured was a long enough time to prepare me for the AT. I'm revising my plan, and deciding that next year I'll do both my 4 and my 5 night hikes. Why? Because then my age will correspond with my nights, which makes me happy for some reason. (6 nights at 46...7 nights at 47) Also, then I will have 9 nights at 49 to do the Wonderland Trail--the grand finale. (If I can do 93 miles in 9 days, then I will be on par with 10 miles a day, and prepared for the 500 miles in 50 days.) That wasn't very brief was it? Sorry.

I had a terrible time deciding what to do for my 3 night hike this year. Part of me wanted to be all hard core and do it alone, covering as much distance as possible. But anyone who knows me knows I'm not really the hard core type...I'm more the "is there an easier way to do this?" type. Melissa said she could do one night with me, so the itinerary that finally developed was this: hike Yellow Aster Butte with Mel the first night, then drive a little way to the Hannegan Pass trail-head and hike in that area for a couple nights by myself.
After quite a bit of farting around stopping for gas, stopping at the ranger station to get the bear bin, driving past the forest road to the trail-head (it's literally in the parking lot of the snow maintenance sheds, not past it as described in the "100 Classic Hikes" book) figuring out what to do with Melissa's car because it bottomed out trying to go up the road (good thing I was driving my SUV) we finally made it to the trail head around 12:30. I was so anxious to get going I could barely eat my lunch. I absentmindedly took the car key off the chain and put it in my pocket. (Trying to save pack weight? Honestly, I don't know what I was thinking) A few minutes later I realized my pocket wasn't the best place, but it was already too late...it was gone.

Melissa assured me it couldn't have just disappeared; but I knew better. I'm quite good at making things disappear. We looked EVERYWHERE--for over an hour. I was in full blown red zone panic mode--tears and everything. Why? It's just a key for heaven's sake. But it's having to call my husband and have him come to the rescue--again--when all I want to do is show him (and myself) I'm a strong, capable woman...not some idiot who loses her key before we even leave the car.

A very sweet couple came over and offered to help. After telling them our sob story, the man replied, "Well, we keep an extra key hidden under our car. Only problem is, we can't remember where we hid it". I really wanted to hug him. 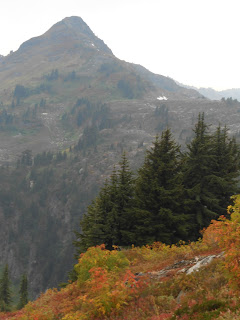 We didn't get going until almost two...so much for thinking we could squeeze in Tomyhoi Peak after setting up camp. But it didn't take long before the beautiful day and breathtaking views made us put everything behind us and just take it all in. 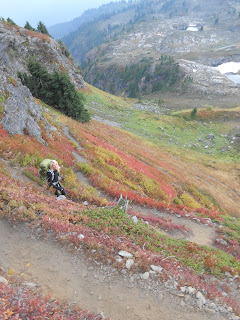 I think we made it to the tarns (hiker speak for small lakes) around 5:00. It was actually nice not to have to worry about hiking anymore--to just set up camp and enjoy the evening. We had the whole place to ourselves! In spite of everything, it turned out to be just about the most perfect day imaginable. Tomorrow's a new day, so I could wait until then to worry about what kind of mood Ken would be in after wasting 4 hours of his day bringing me a key. To be continued...
http://kellbell-whywouldanyonereadthis.blogspot.com/2012/10/day-two-hannegan-pass.html 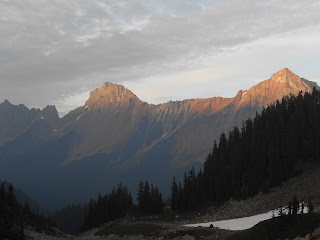 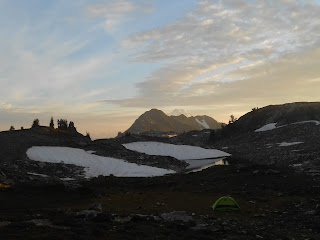 Mount Pilchuck and the Masses

Let me just start with hiking lesson #21…if the hike you are thinking about doing is described as one of the most popular in Washington and cheerfully warns to “expect company and enjoy the camaraderie”, you may not want to pick the last Saturday of the summer to do it. And especially don’t take anyone who hates crowds. (like my husband…I thought Disney World was going to kill him)

But how can you not want to sneak a hike in on the last weekend of the summer, especially when it’s a perfectly glorious 70ish day? Ken couldn’t resist, even with all the work he knew he should be doing. Our friends were also looking for any excuse to be out in the sun. I called them LAST minute (leaving in an hour) just to ask if they knew how long it would take to get to Pilchuck. I didn’t think there was any chance they could swing going on such short notice, but as soon as Melissa asked, “Hey Rick, how far is it to Mount Pilchuck?”, I heard him answer, “Can I come?” 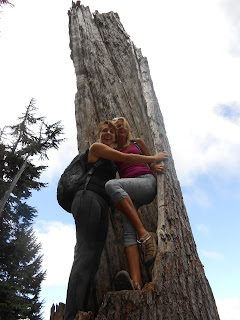 I was thrilled to have a group to go with me—the more the merrier, right? Well…I have to say that expression has a saturation point. It’s merry until you drive into the parking lot and see at least 50 other cars. Apparently half the state of Washington was also looking for an excuse to leave their chores behind.


Melissa and Ken (the long legs, as me and Rick would call them) would get way ahead, only to be stalled by another group of slow pokes. Melissa finally asked, "Can't we just scramble up another way?", to which me and Rick (Rick and I? English is a stupid language ;)) quickly scolded, "Now, what would happen if everyone did that?" Not 10 minutes later, both Rick and I (is that better?) took a little side path around some people (trying to catch up to the long legs, of course) and got chewed out by another hiker. (well, I got chewed out--Rick conveniently disappeared) It really sucks getting busted for something you just told someone else not to do...but that's what you get for not following your own rules. (remember lesson #5, "no matter how tempting, stay on the trail"?...oops)﻿


When we finally got to the lookout tower, it reminded me of a bee hive. Ken was definitely not "enjoying the camaraderie"...I'm glad I couldn't read his mind, even though I know what he was thinking. But the fact is, regardless of how annoyed we are at the masses, we have to realise we are part of the masses. When I pointed out this bit of zen wisdom to Rick, he jokingly responded, "Yeah...but don't they know who we are?" And though he was kidding, that is sort of the heart of the problem, isn't it?--Deep inside thinking we are better than others. I know that's an attitude I always have to keep in check.
﻿


And so, if you decide to visit the "Social Mountain", (as the WTA describes it) be sure to have your 'zen' on, remember we are all created equal, and get your butt in line.