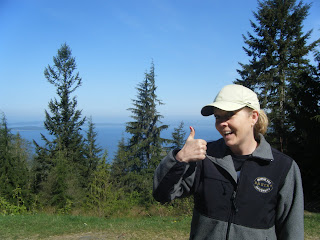 Passing the point of no return.  That's what happened on this 3 mile turned 9 mile hike.  Poor Jewell--she thought she was going to get home in time to work in the yard. (At this time of year, whenever there is actually sun outside, that's all us Northwester's can think to do.  We know if we pass up a lawn mowing day for fun, we may have a jungle on our hands when the next chance rolls around. It's sad, really)  But I talked her into doing something quick and local; a beautiful drive up Chuckanut and just a stroll to Lost Lake, turn around come back, be home before 2:30.


But there's something about turning around and going back the way I just came that really rubs me the wrong way.  So after we sat in the sun and ate our snack on Lost Lake (literally on the lake...we had to crawl out on a log to be in the sun, and like I just said, if the sun is out around here, you do whatever it takes to be in it) and it was time to either turn around and go back OR keep going and do the whole loop...we thought, let's just go a little farther.  Maybe there will be a spot where we can cut across and shorten the loop. (From the map, it looked like it would be so easy.  Unfortunately, this map didn't show the sheer wall of rock that ran along the entire length of the loop...that would be the RIDGE making it the "Chuckanut Ridge Trail". Seems like maybe I should have figured that out earlier.) 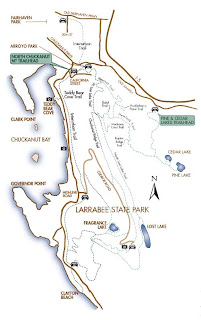 So we went a little bit farther...and a little bit farther...and then we realized we were 'all in'.  We kept looking at the map and saying "well, if we are here, then it shouldn't be too far to get there"...not realizing how NOT to scale this map was.  And there was no signs with any sort of mileage on them, so we just kept going.  And even though I'll admit that this trail kicked by butt, it also made me remember why I love hiking so much.  Nature is so beautiful, and there's that excitement to see what's just around the corner.


When we came to the first waterfall, I gasped. (scared Jewell to death...she was certain a bear was going to be charging toward us) Wouldn't you know, this is when my camera battery died.  I SO wanted a picture, and even considered coming back later when my camera was working.  (that was before my butt was completely kicked...I will have to be in much better shape before I feel up to tackling this hike again) So I cheated and got a picture online instead, which I don't think really does it justice. 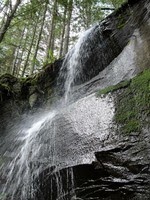 Then we came to our second waterfall, which was possibly even more amazing then the first. (Another online picture..."Mossy Falls" is what it's called.  Creative name, right? ;) 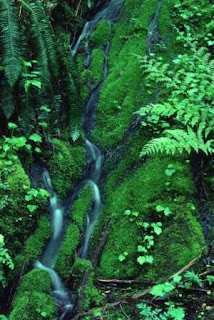 But my favorite moment, and the part that made my day was when an owl swooped down in front of us.  Of course I've seen owls at the zoo before, so it doesn't seem like seeing one in it's own environment should be that big a deal.  But it was a big deal, and even more-- it was magical. (looking up a picture of an owl online is definitely not going to capture that, so I won't bother ;)

I also wanted to mention an intriguing couple we passed going the opposite direction and got to chatting with.  He was on the board of directors (or something like that) for a National trail I had never heard of..."The Pacific Northwest Trail".  So far it runs all the way from the Olympic Peninsula to the middle of Montana, with plans to connect it with other trails to eventually make a coast to coast through trail.  We just happened to be on a part of it when we ran into them.  Here is a link for anyone wanting to know more:  http://www.pnt.org/trail.html

I'm not proud of how I ended this hike.  The last hour or so felt like one of those nightmare car trips where the kids keep asking, "Are we there yet"...except I was the whiny kid. But Jewell kept a great attitude--even though her yard work was put on hold AND her knees were starting to give her problems.  (To the extent that whenever she was going downhill she had to keep her knees from bending...and how did I support her?  By telling her she looked like a hiking Frankenstein.  How do I still have friends?) 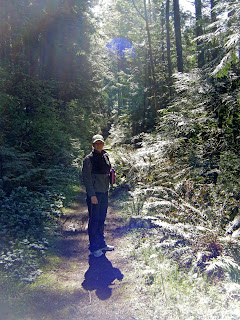 I was overjoyed when the trail finally started heading down to where I was SURE the car was parked when Jewell turned around and said, "What if this is wrong, and this isn't actually going to the parking lot, but just to the road which leads UP to the parking lot", to which I replied, "Then I will sit down and cry".  But thankfully, when we got to the ROAD (and not the parking lot) there just happened to be young man driving down just at that time; and yes, I did not hesitate to flag him down and beg him to drive us up to our car.  "You've done your good deed for the day/ your mother should be so proud/ you've saved our lives" we cooed the entire mile and half back up the road. (A mile and half that felt like twenty and would have surely turned me from whiny kid into full blown pain in the ass)  And since we survived such an ordeal, we decided to treat ourselves to a wonderful late lunch at the Rhododendron Cafe on the way home, which was divine.  So here's to Jewell, who sacrificed her yard and knees to spend a day hiking with this less than valiant friend. 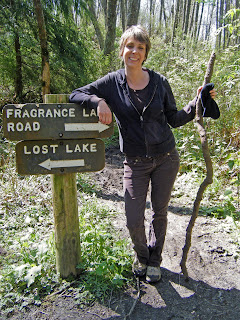 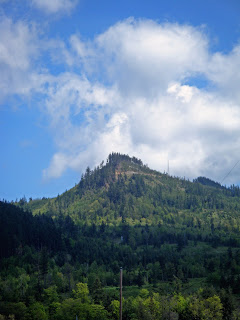 Saturday mornings are not my favorite.  It's probably because the kids are not in school, and they are usually just laying around like lumps.  This last Saturday was particularly bad-- I know when I'm throwing the clothes in the dryer and slamming it shut, or bursting into tears at the kitchen sink (or in this case, both) I can possibly chalk it up to hormones...but I still hate it.  Because my inner critic is saying things that if I'm honest I have to admit, hormones or not, have some truth to them.  But it's the brutality of the accusations that really get to me.  "It's your fault your kids have no ambition...you haven't been any sort of example. You never make them clean up after themselves...no wonder they are such slobs.  If you were just a better mother, maybe they'd have a chance at success, but as it is..." and I have no strength to defend myself, just tears and despair.


So on that happy note, I decided to go on a hike.  Ken caught me crying before I left and gave me the manly advice not to "freak anybody out" while I was hiking.  ("Watch out, here comes a hysterical woman!  Run for your lives!")  So I choose a hike where I would spare the public my dramatics...it's only ten minutes away and not many people hike there because, like my thoughts, the trail is quite ugly.  What a better place to throw a grand pity party than Devil's Mountain?
It's really just a service road--gravely, weedy, without many pretty trees or wildflowers, and steep as well. 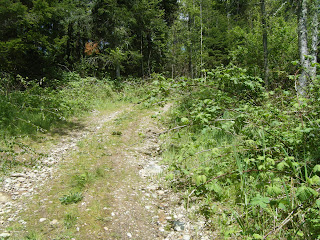 And as I huffed and puffed and sobbed along,  I tried to figure out how I was going to be a better role model to my kids. Get up at 6:00am every morning and hike this stupid mountain...that shows self discipline.  Never take another drink...that shows self control.  Go back to school...that shows self reliance.  Self, self, self.  Meanwhile my dog Lexi bounced along, enjoying the smells, the puddles, chasing the birds...living and enjoying just being what she was created to be. 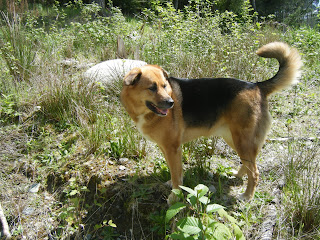 Dang, sometimes I really resent being human.  But then I got to the top, and ohhhhhh...the mountains, the valley, the farms, the ocean and islands.  Such beauty.  So bigger than my despair and guilt and shaming thoughts.  Bigger than my fears.  Can I not trust the Creator of such loveliness to lead me when He promises He cares for me? 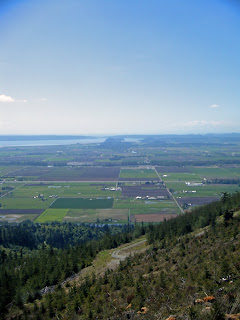 I told a friend of mine that "God is bigger than our mistakes", and then reminded her that God's strength is made perfect in weakness.  Do I really believe it?  I'm trying--when my hormones will let me :)


So as I made my way back down I prayed and asked some hard questions.  "Am I a problem drinker?"  I decided when I got home I would get online and look up A.A.  (they actually have a 'test' that if you answer yes to 5 or more questions you can consider yourself an alcoholic...that was one test I was thankful to fail)  I prayed about going back to school; even though money's tight, maybe an online course here and there is doable.  Hiking Devil's Mountain everyday?  Let's face it, there's no way in hell that's going to happen. (pun intended ;)  I was deep in my thoughts ("Kelly's world" as my neighbor calls it.  I never wave when we pass in our cars because I'm often stuck there) and you wouldn't believe what happened.  I managed to get lost.  (which is pretty difficult to do, considering it's a ROAD)  Kinda ironic, huh?  But unlike usual, I didn't panic.  I didn't beat myself up. (well, maybe a little.  The road goes down...how hard can that be?)  I didn't obsess over the time I wasted. (just more exercise, right?)  I just turned around and tried to find where I had gone wrong.  And eventually I did--there was a Y in the road I hadn't noticed.  Lessons learned...sometimes it takes getting lost to find them. 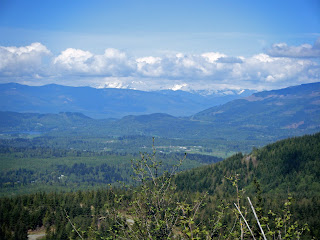