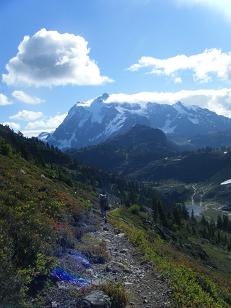 Yes, I know it's sad, but this post is finally going to wrap up the Chain Lakes saga. After Mel and I got all settled in our tent for the night, we just kept talking and giggling as girls will do. I don't know what time we fell asleep, but I'm guessing it was pretty late because we slept in until 8:30. I expected to be packed up and heading out by that time, so we tried to hustle. I say "tried" because everything was frozen, which tends to disable your thumbs from working properly.


This is where hiking lesson #3 and #4 come into play.  #3--you need the rain fly on even it's not raining to protect you from the frost...this we knew, but the lesson we learned is you should put it on before you start drinking, otherwise you won't be able to figure it out and you'll just drape it on, which doesn't really work but you won't care at that moment. (but you'll care in the morning)  #4--bring your backpack in your tent so it doesn't resemble a Popsicle when you go to put it on. (Mel did this and told me to...I ignored her. Again, I think Jack Daniels may be to blame)


Getting out of the sleeping bag was the hardest part, and we both thought that a sleeping bag that was pretty much a body suit that you can wear while you pack up would be a great idea. (would somebody get on that please? Call the Snuggie company :) 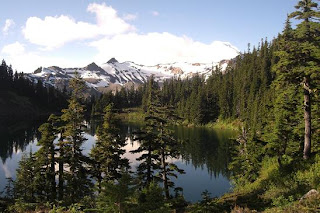 Our saving grace was that it was an absolutely beautiful day, so even though I hate being cold, it was hard to be cranky. As we were making our way back to the main trail it was shocking to me how totally different everything looked, and it was actually even more difficult to stay on the right path. I'm glad I wanted to take a picture of the sign I had misread when we came in, because it reminded us that we needed to "turn" in order to do the loop. Otherwise I bet we would have just kept going back the way we came, and it would have been such a shame to miss the upcoming views. 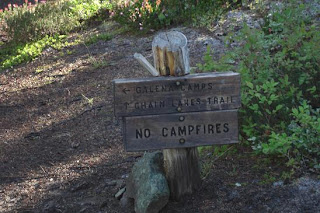 So we went back up that steep hill we took a detour on the day before, but this time we kept going...up...and up.  I must say, I greatly prefer going down, but the great thing about going up is getting to the top of something, and this was no exception.  Behind us was Goat Mountain (I think :) 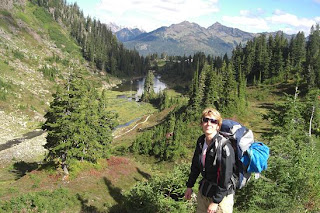 and in front was Mt. Shuksan (pretty sure), 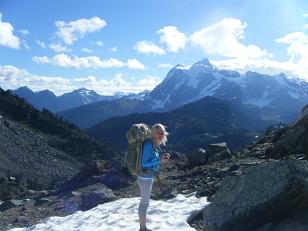 and let me tell you, if I knew how to yodel that was the time to do it.  (Mel, your Dutch...where was the yodeling?)  Now we would be starting the decent, (hooray!) but there was one problem.  Where did the trail go?  Being at the top, we could see where we were supposed to end up, but with no obvious way as to how to get there. We considered just scrambling down the rocks (it didn't look like it would be that hard) but decided to actually break out the map instead. Using the map to locate the trail...what a novel idea!

Yes, now we could see the trail was to our left, carved into the side of the mountain...way over there...and it looked boring and unsightly.  Hummm...maybe just scrambling down would be faster, and more exciting.  But remembering the "Mr. Short Cut Bones Man" (see "Not Just Whistling Dixie" blog) we decided to make our way to the real trail, and once we got there we were SO glad we did.  Looking over to where we had been, we now could see how terribly steep and treacherous it was and realized what a bad idea trying to go down that way would have been. (plus the real trail was amazingly beautiful--you just couldn't tell from such a distance) 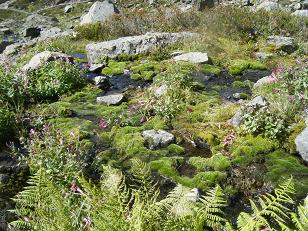 Thus we come to lesson #5:  no matter how tempting, always stay on the marked trail, even if you have to backtrack or sidetrack to get there.  And so we come to the end of my story...happily making it out alive and with all limbs attached, ready and awaiting future adventures.  I will try to post any hikes I might do this spring, but what I'm really looking forward to is next summer when I hope to do a two nighter!  Until then, happy hiking everyone! 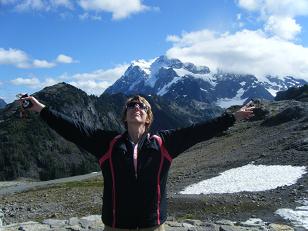