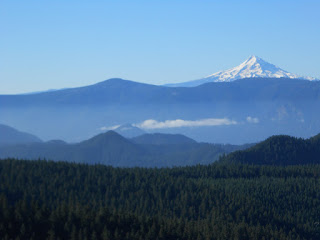 On my adventure thus far, I had been freaked out by a couple things: the thought of drug addicts invading my camp, and unknown creepy howls in the middle of the night. (Oh, and those darn grouse that stay quiet and hidden until you are right next to them, then they furiously flutter away...scares the crap outta me every time!) As I was approaching the camp I needed to stop at for the night, it was my fear of people that was most on my mind."Campsite near an unpaved road" was the PCT map's description; exactly where all the crazies would come find me, I was sure. I told myself I would camp at a random place in the woods if the site looked too sketchy, because I knew I could not make it another 6 miles to the next designated spot. 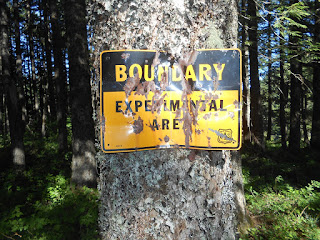 Finally reaching the campsite, all I can say is "near" the road was an understatement...it was practically on the road! But "unpaved" was also an understatement, because this road looked like nobody had been on it for years. I deemed it safe, even when I noticed a shot gun shell, because I figured it could have been there for over a decade. Though unfortunately, it did put thoughts in my head. I had seen many shot up signs along the way thus far, and it added to my impression that whoever was wandering these wild forest roads could not be trusted. Now, I know shooting up signs does not a rapist/murderer make...though it doesn't exactly suggest "law abiding citizen" either. But, I pushed those thoughts aside, because I was excited that this site had a makeshift fire pit. My Sasquatch night was not far from my mind either, and I was looking forward to making lots of smoke before going to bed.
I was cuddled up in my sleeping bag and feeling close to sleep, even though there was still plenty of light in the sky, when I heard another strange howl. "You've got to be kidding me!" was all I could think as I held my breath and listened. More cries, yells, and hollers. Those are guys whooping it up! Why are hikers doing that? Wait...it's coming from the road!!! OMG!!!!
I immediately went into full fledged panic mode. I realize now I had created a whole story in my head; one that was developing ever since my experience at Gillette Lake. Here is how my drama played out: A group of drunk/stoned men come up the road piled in the back of a big ol' truck...they see a woman all by herself camped next to the road...they continue up and do their partying and shooting madness...once they are done, and completely hammered, they come back down and decide they want to harass the lady in the tent...things get out of hand as they incite one another...and now you have a Dateline episode. 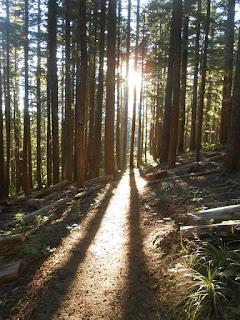 This story was very real to me, so my body was reacting as if it were real. I think I may have even been having a panic attack, because I was having difficulty breathing. I don't think men can fully appreciate the gravity of this fear. Even if they worry about the women they love, they haven't lived a woman's life. But I know every woman reading this understands my panic completely.

All the options for what I should do went round and round my head, but ultimately I decided to just stay put, because it dawned on me that they hadn't actually seen me. Why would they assume it's a woman in the tent? (And if I got out to pack up, they might then come back and actually see me.) But I couldn't get past the possibility that this story could come true; thus when I discovered my phone had a couple bars, I sent my husband a quick text before turning it off to save the tiny charge I had left. Here it is:
"I'm camped by an abandoned road at mile 2183. I'm really scared because a bunch of guys just came up the road hooting and hollering and they are shooting. I just wanted you to know, so you know what happened if I don't come back. I was raped and murdered by a bunch of drunk guys. Not how I imagined dying on the PCT. ;) "

I have to roll my eyes a little now, because of course I had imagined dying this way plenty of times. The winkey face at the end was my way of acknowledging that I knew I was being a bit extreme in my logic. I understood I had created a "worse case scenario" that was most likely not grounded in any reality. I trusted my husband would know that. He's never been one to panic, and even though I felt a little guilty putting this worry in his head when we both knew there was not a damn thing he could do about it anyway, I also knew sending it would help me calm down. Ken doesn't construct these kind of horrific fantasies; he would instead deconstruct it, and come to the belief that I would be okay. I needed that same mindset. It took the better part of the night, but eventually I too was able to talk myself out of the dire tale I had convinced myself was happening when it wasn't.
So, although this is not exactly a hiking lesson, it is one of the most profound and difficult life lessons I am learning and will continue to learn, so I'm including it in my list. Hiking Lesson #55: Be careful with your imaginations. Though it is true that tragic events happen in life, playing them out in your head does not "prepare" you to face them, it only robs you of peace and makes you suffer through a false reality. Knowledge of survival techniques is different--but you can learn plenty without imagining a horror film with you in the starring role. Doing so does not add to that knowledge, so don't fool yourself into thinking it does.
I am not going to go through the night's "deconstruction" process, but I do feel I need to explain that at some point I realized I never heard an engine. In the morning I checked the road, and sure enough, no broken branches or any sign that a car had come through. The only answer I can come up with is this: what I had heard was simply a group of kids coming down on mountain bikes, whooping and hollering at the excitement of it. My mind heard them coming up instead of down, because that fit my story. My mind heard gunshots instead of far away firecrackers (it was the Friday after the 4th of July, after all) because that fit my story as well. I was interpreting everything through the lens of my pre-existing anxiety. 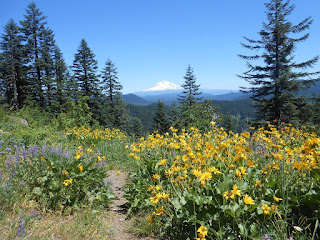 Before I left to head for my final camp, I stood there on the road and imagined how fun it would be to fly down that hill on a mountain bike; living only in the thrill of that moment of speed and danger, without letting any fear or worry of crashing stop me. I smiled and went on my way, determined my last night was going to be a good one.
It was yet another day of isolation...once again, not a single soul to be found. After 8 miles, I got to the water and where I planned on staying. Before setting up, I thought long and hard about going the next 4 miles to my car. I had plenty of time; much less energy of course, but I knew I could do it. Except I felt I had to conquer this last night; undo the terror of the night before. I decided to stay, and that I'd even put ear plugs in. Whatever was going to come in the night, let it come; but I was sleeping, dammit! If bears, or Sasquatches, or crazed men come to get me, so be it. Laying there listening for upcoming doom would not change it anyway.
I did have a visitor that night. Just before I retired to my tent, a young man showed up asking where the water was. He was just beginning his journey--started at Panther Creek (I told you most PCT'ers don't bother with those first 21 miles on Section H!) and planned on finishing all of Washington. I wanted to give him the trail name "Baby Face" because he honestly looked to be all of twelve; but besides the fact he probably would have hated it, I don't think it's fair to get a name on your first night. I wished him well before I went to bed, because I knew I'd be up at the butt crack of dawn and would never see him again. Just before putting my ear plugs in, I hesitated...what if a bear attacks my neighbor and he needs my help? Ha ha, oh brother! I shoved them in hard, and it was lights out...Baby Face was on his own.
That's it! Nothing more to tell. I finished; and so here I am, only a year away from facing my biggest goal/challenge/fear of hiking 50 days on the Appalachian Trail. It's been almost 8 years of growing/changing/learning; from my first backpack on the Chain Lakes Loop until now. Is 55 lessons enough? (I love that I ended on double 5's! Feels serendipitous:)) Will I chicken out? Get injured and have to quit? Have a life situation where I won't even be able to go? No need to speculate or worry, because only time will tell. Let it come, and let it be what it will. I think I'm ready.
P.S. I'm glad I choose to have such a short day on my way out, because I needed the ENTIRE rest of the day to drive from the south end of the state to the north. This is not a hiking lesson, so I don't have to wreck my perfect number, but advice for all is never drive through Olympia/Tacoma on a Sunday. The only blister I got from this whole trip was from wearing slip on's and having to use my clutch for hours during the unending stop and go traffic. I had to recover from that drive far more than from my hike!