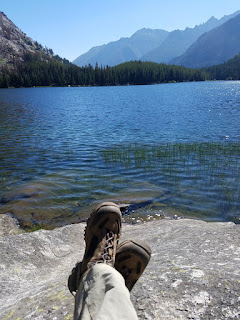 I'm going to die. That is hiking lesson #56. It's true that I didn't want to mess up my perfectly serendipitous number of 55 hiking lessons learned these past 8 years, but I just had to go and do one more "trial run" before I leave in less than a week...and well, it just about killed me. And if a fairly moderate hike of 9 miles in 2 days (that would be only 4.5 miles a day) almost killed me, then I'll surely be a goner by day 3 of my "10 miles a day" excursion. 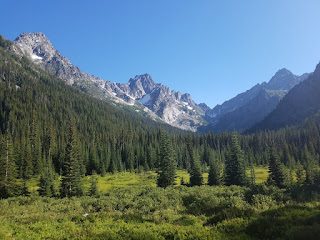 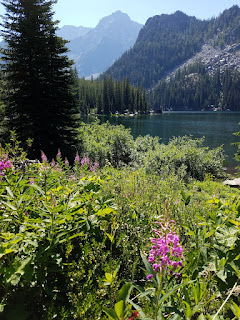 I'm blaming Leigh for this horrible insight. Of course she would win the lottery to camp at the ONE Enchantment lake I haven't seen yet. (Well, except for the Caroline Lakes, but do they really count?) She had such grand plans of staying all four nights at Lake Stewart, and using it as a base camp to explore the whole area...an agenda far too ambitious for me. BUT, I could take my own car and stay just one night! I mean, I really should make sure everything I plan on bringing to the East Coast makes sense and is in good working order. Plus, how could I say no to Lake Stewart?

Leigh warned us all (five "suckers" she roped in) that the mosquitoes might be bad. I expected that...you can't go anywhere at the end of July and not encounter a fair amount of the little beasts. Though, what I did not expect was to get punctured 43 times...not including the bites that I believe are on top of bites. It was a full-out assault!!! It was like they were out for blood!! (Ba dum chhhh ;)) 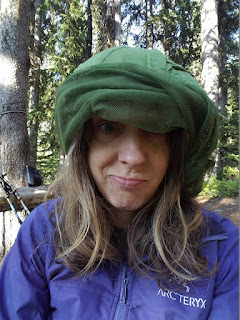 And can I tell you something? I don't care what anyone tells you, nothing works but DEET. I made a huge mistake of trying to save pack weight by bringing my itsy bitsy hiker's size pen that was almost empty. I figured everyone else would be loaded up with the big guns and would share. And sure enough, they did have full size 6 oz spray cans...of the B.S. Skinsations brand. NOOOO!!! Leigh even gave me some of her peppermint essential oil as a last-ditch effort to fend them off. I'm pretty sure it only enhanced their dining experience; so from now on I'll be calling that "Mosquito Special Sauce". I hear the East Coast bugs are even worse...so yeah, I'm worried. I don't know how much more itching I can handle.

But the truth is, it was not bug bites that discouraged me most on this trip. It was the fact that in less than a mile I was so tired I wanted to sit down and cry. Seriously, I could barely keep moving. It really scared me. I was in my head BAD..."You think you can do 10 miles a day?!! You can't even do 1!!! You are pathetic!!!...and did I mention that you're going to die?" 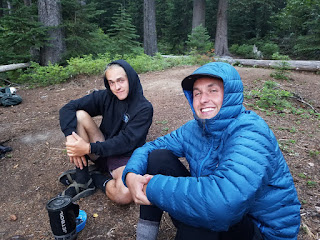 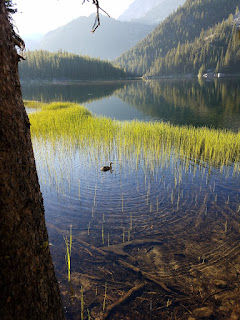 I'm pretty sure it was the heat that sucked my energy; and the fact I was not hydrated well. (I guess a McDonald's milkshake doesn't really count for much...who'd a thunk? ;))
I believe this was the first time I've hiked in 90 degree temps, and now I know it short circuits my ability to effectively move my legs forward. This is problematic, considering 90 and up is the heat I'm heading towards...except it will be more humid. Yep, I'm going to die.
But here's the thing; I eventually got to the camp. Slug slow, and bit to hell, but I made it. So I amend lesson #56 (which was a statement and not a lesson anyway) to this:  "Don't get discouraged when your mind tells you that you can't do it or that you are going to die. Just keep moving and you'll get there. Oh and drink more water, ya ding dong!!!" 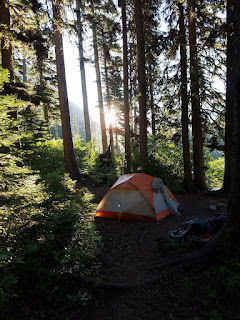