Going Up and Bleeding Out in Washington 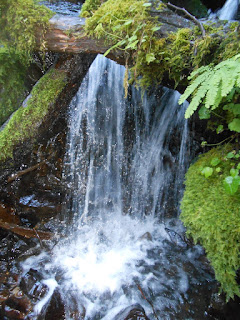 CAUTION: Mensuration talk ahead. Click away now if buying tampons for your wife/girlfriend/daughter makes you uncomfortable. Read ahead if you want to better understand the challenges of a woman on the trail...but you have been forewarned--I'm not holding back with describing the reality of what it's like.

Sometimes I wonder if my body wants to sabotage me. Why is "Aunt Flow" such a bitch? She always shows up just before the vacation, special occasion, long trip...pretty much any time she can get in the way and make you miserable. You mark your calendar, count out days to try to work around her, but no. Here she is, a whole week early. "SURPRISE, aren't you glad to see me?!" 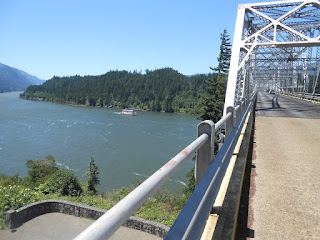 Thank God my fourth day brought me to the town of Cascade Locks, Oregon. This is the home of the famous "Bridge of the Gods", where the PCT crosses over into Washington. I was so excited/nervous about walking over it...but first things first. I had to find a store, and head directly for the "feminine hygiene" isle.
I bought what I thought was an absurd amount of products (turns out it was barely enough--apparently it's impossible to have too many baby wipes) and some period medication, (wine and chocolate) then headed back to the bridge.
I have to say my nerves were not so much about the cars and height, but more about the exposure of feeling like everyone is looking at you. Normally I'm not opposed to that kind of attention (I might even like it a little ;)) but because I'm not a "thru-hiker", I felt like a big fat fake. I have SUCH respect for those who have crossed after coming from Mexico or Canada, that I felt like I should have a sign that said "I'M ONLY OUT HERE FOR 9 DAYS! I DON'T DESERVE YOUR STARES! LOOK AWAY!" 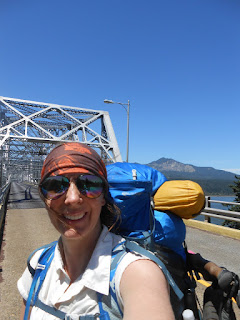 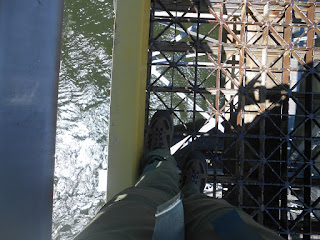 But I have to admit, I was geeking out too. (Can I say "geeking out" about hiking?) I thought about what a thru-hiker experiences as they cross--it must feel a bit like a right of passage. I felt it a little too...even as a big fat fake. ;) 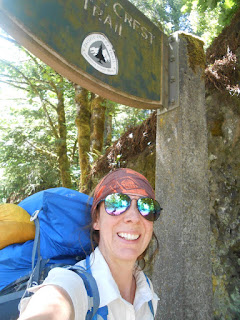 I knew as I started Washington's "section H" that I shouldn't expect much. Most hikers heading to Canada skip the first 21 miles altogether and instead march 14 miles up the highway where they can easily connect again at Panther Creek. Descriptions I read included "not great views, loads of poison oak, rocky trail, dry waterless stretches"... pretty much misery on a plate. But I was avoiding snow, and getting my 9 day goal in, so I just excepted that this was part of the deal. And besides, misery is what makes a hike great! Serve me up!
At first it didn't seem so bad. Lots of day hikers were on the trail who were also headed to Gillette Lake, where I planned to camp. It must be beautiful if these people are spending their 4th of July holiday going there! But suddenly I hit the clearcut--an ugly, no shade, poison oak mess. Oh well...the lake will make up for it!
After an impossibly long mile, I crossed the forest road where Gillette came into view. Not exactly mind blowing, but not that bad either. Though, once I got down there...bad. Never have a seen campsites so trashed.(Except at Lake Blanca, but that's another story.) It started putting thoughts in my head. Anyone can drive that forest road and come down here and party. People do drugs in places like this, right? This does not feel like a grandma-friendly environment. As I was filling up my water and contemplating what to do, a couple came up behind me. "Did you camp here last night?" she asked me in a sort of dreamy/weird way. Oh, and did I mention she was completely naked? No more contemplation needed...deuces, I'm out.
I thought maybe I could go just a little bit further where my map showed another area for tents, but the people who had already taken it over looked like they may have been there for the last few months. Of course, as my mind quickly jumped into complete paranoia mode, I concluded they were homeless meth heads that would kill and rob me if I even stopped for a second.
I kept going, crossing more forest roads, more and more clearcut ugliness...what was I thinking doing this section!!!! One time I thought maybe I'd just "hide" off trail where it was flat, but as I went to investigate, I found a party area with a big bonfire firepit. OMG, I can't escape! The druggies are going to find me anywhere I go!!!
It took me awhile to calm down. But once I hit the forest and realized I had not seen anyone since the lake, I started to feel safe again. When I finally got to the next camp site, I felt far away from anyone; and for the first time that felt comforting! I took my "medication" by the fire, and went straight to bed. 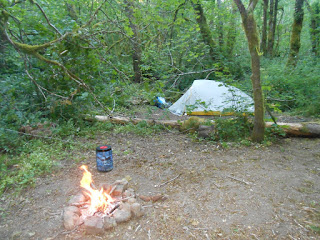 The next day, Aunt Flow followed me hard. Again, as much as I prefer having some other hikers around, this time it was a comfort to be alone. Stopping to pee is bad enough...stopping to pull out my cup and dump it, attempt to clean it, and then shove it back in and wipe all the blood off my hands...that is another show altogether. For those who are wondering what a cup is; it's the only way to survive when you are bleeding like a stuck pig. Supposedly it will hold 8 hours worth of menses, but for those of us who are blessed to be pre-menopausal and are having a "full shed" kind of day, it will get you through an hour or two at best; but that is way better than stopping every 20 minutes to change a tampon. 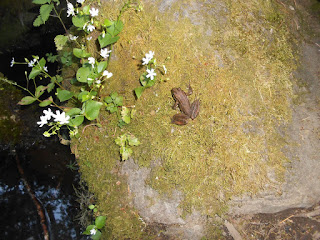 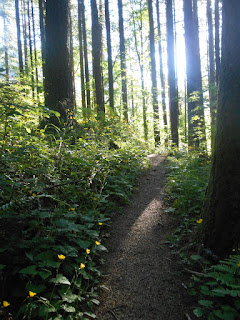 Besides being upset with my period, this day felt like I would never stop going up. Relentlessly up and up and up. I let out a sob when I looked at my watch, thinking I had been going for hours when it had only been 20 minutes. This is when I learned lesson # 54: For heaven's sake, just stop and take time to collect yourself when you feel overwhelmed. I know this seems obvious, but I really don't like to take breaks. I pride myself with my "slow and steady wins the race" determination. When I'm feeling frustration, my ego tells me to keep going so I can "earn" the privilege of stopping at my destination. But this trip really taught me it's okay to be slow AND take your time. What a relief!
I was so ready to stop for good when I got to the place I thought the camp must be, but I could not find it. Either I keep going, and hope it would show itself soon (and risk that I had already missed it and would have to go another 5 miles to the next camp) or I just make my own camp at the first available flat spot. I opted for stopping.
I had not seen a single soul since Gillette. Never had I been so isolated, and it was starting to get in my head. Being in an "un-designated" campsite added to the stranded feeling, and the fact I was leaving puddles of blood everywhere certainly compounded my uneasiness. 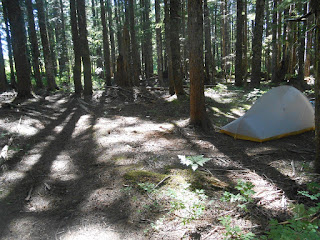 That night was bad. I was too scared to leave my tent, but thankfully I was so dehydrated I didn't have to pee. (They weren't kidding when they said "dry waterless sections"--we're talking 11 miles!) But what do I do about this ridiculous amount of blood? I couldn't use my cup, unless I wanted to go out and add to the predator bait; so I reverted to the tampons and the 20 minute change. But is having zip locks full of gore in the tent any better than having a circle of blood around it? I didn't think so.

And then I heard it. That's called a cliff hanger. :) Next time.