Dungeness Spit Will Do for Now 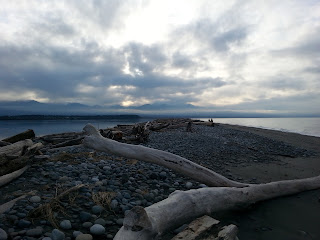 The glories of Shi Shi will have to wait. Whether or not I'll ever get my daughter to come with me, though...to Shi Shi or anywhere ever again, has yet to be seen. But I believe the trauma of witnessing that brutal bear attack will wear off eventually; and we will someday have the mother/daughter excursion that I was dreaming of. 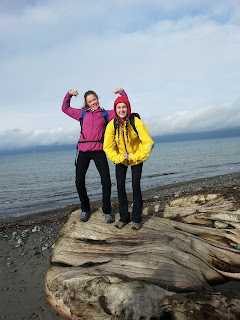 Okay, the bear attack was only on the big screen. It still made Summer turn to me with all the teenage angst she could muster and announce, "You thought this was a good movie to take me to? If you think you'll ever get me to go hiking with you again, you are wrong!!" If you haven't already guessed, the movie is Revenant, and I must say I have never had a cinematic experience quite so intense. It's sort of a JAWS for the new millennium; and it just may keep as many people out of the woods as the old shark movie kept people away from the ocean. But not me; and hopefully not Summer either...once she forgives me. 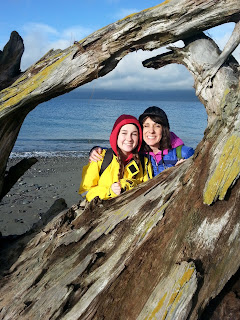 I was so thrilled and impressed she agreed to do a trip in January. I had taken 4 days off work to correspond with her long weekend off school, and I had even convinced my friend Heather and her daughter to come with us. It really wasn't that hard; I mean, how can anyone say no to Shi Shi? A look at a couple good photos of the "Point of the Arches" and you're going to be hooked. I read every winter trip report, and told myself all the reasons this time of year was going to be great; but in the end the rain forecast squashed our dreams. I think Heather and her "the joy is in the journey" spirit would have rallied if I would have pushed it, but I just didn't feel like suffering. And listening to Summer whine about how miserable it all was would have been the worst suffering at all...and so we bailed on the "teach the girls to endure adversity" plan. Staying at a hotel, doing a day hike, and then shopping and watching a movie in Port Townsend sounded like a MUCH more achievable mission. I certainly didn't expect it to end with my daughter's declaration of the banishment of hiking from her life. 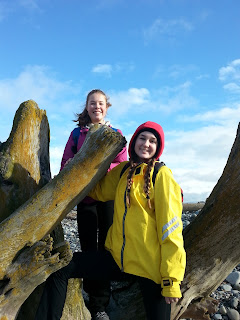 At least we got the day hike in the day before; and it was mostly a complete success. Just a little confusion getting there (not the best signage; use your GPS) and a bit of driving in circles before figuring out how to pay the day fee ($3 at the start of the hike--not at the camping registration) and we were finally off. The tide was in our favor, so we were able to stay on the compacted sand the whole way; making it much easier. EASIER--not easy. Ten miles walking in the sand is a work out; so this was not a whine free hike by any means. 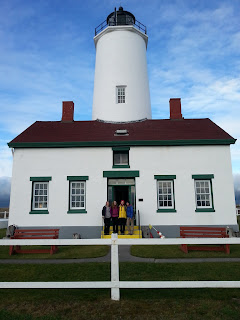 Making the lighthouse our destination did not disappoint. I read the "hosts" would give us a tour; but I had my doubts. Upon arrival she was waving and welcoming us before we even got to the yard! Telling us all about how they had been there a week, about the different people who had visited, and offering to take our picture--these lighthouse keepers were exceptional! (at $350 a person it's not exactly cheap to sign up; but all the money goes toward keeping the lighthouse operational, which is pretty awesome and probably also a tax write off) She hurried us along a little, warning us that if we didn't get back before 4:45 pm, the gate would be locked and we would be stuck. "You have plenty of time" she assured; but knowing my extreme abilities at slowness, I was envisioning our lesson plan of sufferance coming to fruition after all. 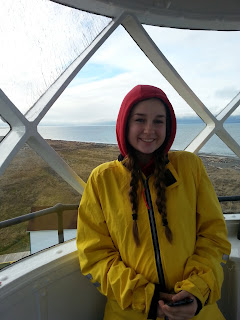 A mile out and creeping up on 4:30, I handed Summer my keys and told her and Naomi to make a run for it. I'm sure she would have complained if not for the fact she does not have her license yet, and therefore must have felt she was getting away with something a little naughty. Plus she got to break the only rule posted on the beach.

We got the text letting us know they had "made it out", but at that point we realized there was no way in hell we were walking the extra mile or more to the gate. After seeing the "Gate Closes at Seven" sign, the girls figured they could come back to rescue us, so it was all good. Except, I'll never understand why that "exceptional" lighthouse keeper screwed us over like that. I'll try to believe she was misinformed...though the truth is I think they may have been growing tired of their hosting duties for the day. 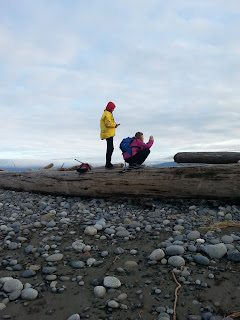 The trip ended the next day at the Rose Theater, with the above mentioned ill advised viewing of a bear mauling. Not my best decision; but like I said, I do believe we will all get over it. And when the sun is out, and the tide is low, and we are all watching the sun set over the glistening waves and sandy beach...bear attacks will be far from our minds and we will know postponing our perfect Shi Shi experience was worth the wait. 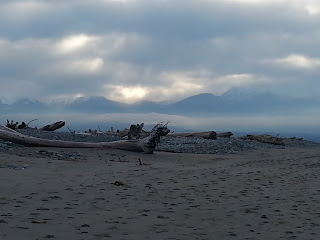 Posted by kellbell at 8:57 PM No comments: